We have been active for many years in water protection together with other associations and initiatives.

BREAK FREE – Restoring the biodiversity of rivers by removing dams 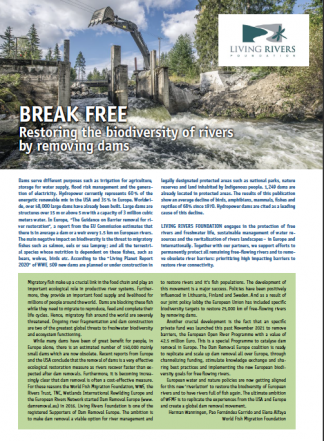 he publication “BREAK FREE – Restoring the biodiversity of rivers by removing dams” addresses the effects of barriers on migratory fish highlighting the worrying and catastrophic situation on the Mekong River (going across 5 countries in Asia) where the constructions of hydropower dams are putting not only the river and its components at risk but also all the already vulnerable populations depending on the Mekong River. The intensive use of water for agricultural irrigation can even lead to the complete drying out of the river bed as it is the case for the Colorado River. A number of dam construction projects are also on the table in the EU, including Northern Italy. On the other hand, there are striking examples of dam removals in the USA that show the efficiency of dam removals on biotopes and ecosystems restoration. In Europe such examples can also be found in France where 2 big dams are currently being removed at the Sélune River and in Finland where dam removal meanwhile is a more common practice.

According to the EU Biodiversity Strategy 2030 at least 25,000 km of rivers need to be restored into free-flowing rivers through the removal of primarily obsolete barriers and the restoration of floodplains and wetlands. The EU Commission released a guidance reporting one dam or weir every 1.5 km on European Rivers. Dams have different purposes, like hydropower or water supply, but many structures are ageing and some don’t fulfil their originally intended purpose, anymore. Whereas it is mandatory to consider the removal of ageing dams, severely impairing migratory fishes, the question of hydropower, especially in energy crises such as we live nowadays, must also be properly addressed.

You can find the Brochure here: https://grueneliga.de/images/Wasser/dam_removal_EBOOK.pdf

We celebrate the migratory fish 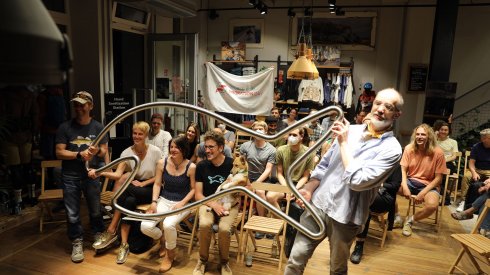 On 11th of May 22 Michael Bender (Living Rivers Foundation), Tobias Schäfer (WWF Germany, Patagonia and flow:europe organized a River Film evening as part of the next World Fish Migration Day (21.05.22) at the Patagonia Store Berlin.

Four short movies were presented, as well as the multi-award-winning documentary “Was Fische wollen. Last chance for the Tyrolean Inn.” from Christoph Walder. It shows the causes and background of the dramatic decline of the Tyrolean Inn and give a voice to the committed fishermen and conservationist fighting for the return of free-flowing rivers.

"Save our trees" - a campaign for Berlin by Grüne Liga Berlin e.V. and Spreequell starts the second round on 19.04.2022 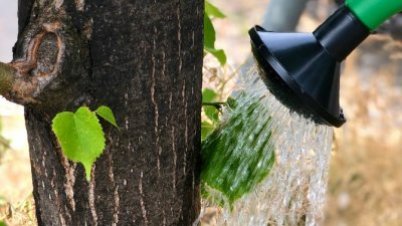 On 19 April, the Grüne Liga Berlin e.V. and Spreequell will once again launch the "Save our trees" campaign. After the successful start last year, Berlin's city trees are to be supported by citizens watering them in 2022. Last year, numerous individuals, families, office communities and watering groups took part in the campaign with great commitment. The Green League Berlin and Spreequell will therefore again be handing out free watering packages consisting of watering bags and watering cans to citizens in 2022.

Anyone observing the weather in 2022 will notice that it is very dry again this year. March was the driest since weather records began. Heat waves are on the rise, to the detriment of the city's trees. The city of Berlin and the district offices responsible for irrigation are calling on the public to help. "Often, Berliners are not lacking the motivation to help the trees, but rather the practical implementation," says Lena Assmann, urban greening expert of the Grüne Liga Berlin e.V. Therefore, the join-in campaign of Grüne Liga Berlin e.V. and Spreequell supports Berliners in helping long-suffering urban trees. 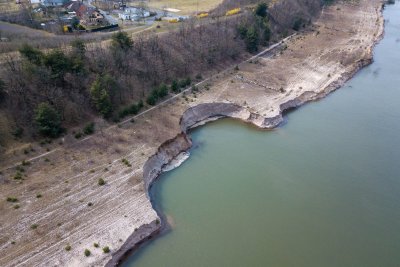 he environmental network GRÜNE LIGA is concerned about the slides on the bank of the Cottbus Ostsee, the former open-cast lignite mine Cottbus-Nord, which faces the city.
"When the grown shore of an open-cast mining lake starts to slide, this is unusual and worrying. With Schlichow, an inhabited settlement lies in the immediate vicinity of the slide. In addition, the area of the quay wall is affected, where the city of Cottbus wants to extensively develop the lakeshore and where millions of structural funds are flowing in," says René Schuster, lignite expert of the association.
Several landslides occurred in February and March. In the Cottbus district of Schlichow, the former noise protection dam was extensively closed off. LEAG is currently analysing the causes. This was confirmed by LEAG and the mining authority at the request of the GRÜNE LIGA last Thursday at the meeting of the Brandenburg Lignite Committee. The responsible department head at the State Office for Mining, Geosciences and Raw Materials also pointed out that the landslide visually resembles the one in Lake Helene near Frankfurt (Oder).

Always up to date on the topic of water protection with the Wasserblatt. With short news items and an extensive nationwide list of events, the Water Bulletin of the Green League provides monthly information on current events in the water sector. Subscribe free of charge to the water bulletin distribution list at This email address is being protected from spambots. You need JavaScript enabled to view it. and receive the water bulletin with the latest news by e-mail every month.
You can find more information about our info distributors here.

All issues of the Water Newsletter 2022:

Michael Bender represents the GRÜNE LIGA as an observer at the International Commission for the Protection of the Elbe (IKSE).

In 2021, the cooperation between the GRÛNE LIGA and the Living Rivers Foundation was intensified and a joint office was established at the federal association.Together with the GRÜNE LIGA Berlin, we are active in the Aktionsnetz Kleingewässer Berlin.