Vernissage in the "Mecca of Forest Research": Photo exhibition opens in Tharandt on a forest in Lusatia threatened by LEAG 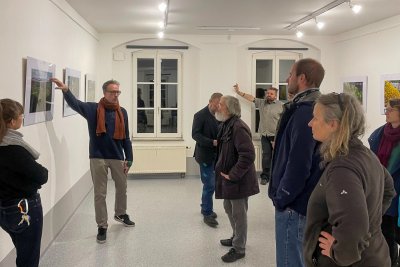 photo exhibition about an endangered forest in Upper Lusatia (Eastern Saxony) was opened with a vernissage in the Tharandt Kuppelhalle on Friday evening (18 November). LEAG, a company owned by the Czech billionaire Daniel Křetínský, plans to expand the Nochten open-cast lignite mine and destroy the forest to do so. Together with the environmental network GRÜNE LIGA, photographer Markus Pichlmaier made the approach of the open-cast mine to forests and villages a visual experience. The exhibition "UNverkäuflich" was opened by Carolina Bräuer from the association "Kuppelhalle Tharandt e. V." and Rebekka Schwarzbach from the GRÜNE LIGA.

The photographs and collages, comprising 15 motifs, are on display in the cultural centre, which is known far beyond the region - a traditional former baths with a classicist entrance building - until 10 January 2023. (Pienner Str. 13, 01737 Tharandt).

"It is a special honour for us to be able to present our exhibition in Tharandt, a place known for forest research," said Rebekka Schwarzbach. In the Tharandt Forest, models of sustainable forestry were developed for the first time in Germany at the beginning of the 19th century. The Forest Botanical Garden, founded in 1811, is considered one of the oldest in the world. Already as a student at the Sustainability University in Eberswalde (Brandenburg), she had heard about Tharandt again and again as the "Mecca of forest research", Schwarzbach reported.

Currently, the forest in Germany is threatened in many ways by the climate crisis, drought and pest infestation. "In our exhibition, we are taking a closer look at a piece of forest in the run-up to the Nochten open-cast mine. Despite the beginning of forest conversion, the coal company LEAG wants to excavate the forest. We are fighting against this," Rebekka Schwarzbach explained to the guests at the opening, some of whom had travelled from as far away as Berlin, Dresden and the Vogtland.

The private owners of the woodland in the run-up to the Nochten open-cast mine refuse to sell their land to LEAG and have instead leased it to the GRÜNE LIGA. The latter has been holding environmental education and cultural events in the woodland since 2020. In the meantime, LEAG has initiated expropriation proceedings against the landowner and the GRÜNE LIGA, which are being processed at the Saxon Upper Mining Authority. "We will not give up the forest voluntarily, the Saxon Upper Mining Authority will have to decide on the expropriation applied for by LEAG," Schwarzbach announced.

"In addition to the inconceivable CO2 emissions from coal combustion, the Nochten opencast mine is also causing massive impacts on the groundwater and polluting the Spree river all the way to Berlin. A rescheduling of the opencast mine is essential in order to at least limit these eternal burdens. In the process, the distance to the villages on the edge of the opencast mine can be increased. All this is what this piece of forest is about," said Schwarzbach.

The exhibition offered plenty to talk about in the context of forest conversion, the climate crisis and water shortages. Over snacks and drinks, discussions continued well into the evening. The transfer of water from the Elbe to Lusatia, which has dried up due to lignite mining, was discussed particularly intensively. A current expert report sponsored by the Federal Environment Agency, the preparation of which is led, interestingly enough, by a representative of a subsidiary of LEAG, has come out in favour of examining a so-called "Elbe transfer" after an initial interim report, Schwarzbach explained. The extent to which this could be economically and ecologically justifiable remained open.